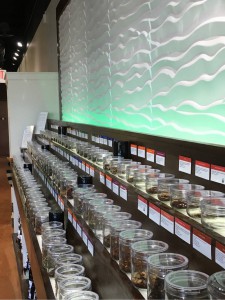 FlyingTee is a sophisticated and interactive high-tech golf, dining, and entertainment venue. Modeled after contemporary sports stadiums, FlyingTee pairs a multi-level sports bar and restaurant with a modern, technology-driven golf gaming experience via 60 semiprivate hitting bays and suites on a full-size driving range.

The Riverwalk experience will be something to remember as FlyingTee puts down roots in this exciting area of the community. FlyingTee and the Muscogee (Creek) Nation have come together to bring this project to life.

FlyingTee, a new state-of-the-art golf and entertainment venue, has chosen the beautiful Riverwalk Crossing in Jenks. FlyingTee, will be a place for friends and family to come together for golf, fun games and great food.

“The Muscogee (Creek) Nation is excited about the continued growth of the Riverwalk Crossing and is proud to be the leader in revitalizing this area for all Oklahomans to enjoy,” Principal Chief Tiger said. “We strive to provide our community with world-class entertainment options such as the River Spirit Casino, the much-anticipated Margaritaville and now FlyingTee. This is an exciting time for us as we continue making the Riverwalk Crossing into a entertainment destination for everyone to enjoy.”

This new and innovative venture is scheduled to have Oklahomans ready to tee off by early 2016. The new “Tee-Town,” FlyingTee, will redefine fun in Oklahoma.

FlyingTee will be a great place for not just golfers, but for sport enthusiasts as well. Golfers of all skill levels can play at FlyingTee, even if you’ve never picked up a club. While you aren’t trying your hand at our interactive games, you can watch your favorite sporting event at our sports bar, sure to be every fan’s

An outlet mall slated for the Turkey Mountain area is now headed to Jenks, according to an investor’s brochure from the developer and the mayor of Jenks.

According to a Simon Premium Outlets brochure created for investors earlier this month, the Jenks site will have 325,000 square feet of leasable space with 90 stores to open in the spring of 2017.

Officials with Simon and the city of Tulsa were not available to comment Wednesday night.

“We are extremely pleased that the Simon Property Group is going to build the Simon Premium Outlet site in Jenks,” Dunkerley said. “For Jenks, we think it complements the area wonderfully.”

That plan for a 48acre development with more than 350,000 square feet of leasable space drew strong reaction from Turkey Mountain patrons who feared that the outlet mall would encroach on their outdoor activities and the natural setting.

Dunkerley said most of the infrastructure needed to develop the Jenks site is already in place. City of Tulsa officials have said how to pay for infrastructure in the Turkey Mountain area had not been determined.

According to Tulsa County Assessor’s Office records, the Jenks site is owned by the River District Development Group LLC.

The land is already under contract for Simon Property group, according to a statement from the city of Jenks.

Dunkerley said the site is already part of a tax increment finance district, and Jenks residents in 2013 passed a road funding package that included streets in that area.

The roads will be constructed in conjunction with the Oklahoma Turnpike Authority and will be ready by the mall’s planned opening in 2017.

Jenks City Manager Mike Tinker said in a statement released by the city Monday night that “this shows investment drives opportunity. … The foresight to invest and plan means it was just a matter of time until a project would materialize the size and scope of the Simon Premium Outlets.”

Earlier this month, Tulsa officials were in discussions with the developers to look at a land swap that would keep the mall and resulting sales tax dollars in Tulsa.

As previously reported, the proposal would have Simon Property Group purchase the property it has under contract at 61st Street and U.S. 75 and could then swap that land with the city of Tulsa for the Bales Park property, a 67acre tract on the opposite (west) side of U.S. 75 at 5801 S. Union Ave.

The Jenks site, just west of the Arkansas River, east of Elm Avenue and south of the Creek Turnpike, has been the focus of previous development proposals that have not panned out.

Originally, the River District Development Group was pushing for a development with 852,000 square feet of upscale and unique shopping at a price tag of $1 billion. A host of restaurants, office spaces, condominiums, hotels and a performance fountain were in the plans. At one point, the site was pitched as a home for a new Tulsa Drillers stadium.

The 300acre site was cleared years ago, but developers said the slumping economy and a lack of capital slowed its development.

“We’re very pleased that this site works for them,” Dunkerley said of Simon. “It’s ready for them and others to build. … “The entire south Tulsa region, including Jenks, will benefit. There are a multitude of developments … for customers to choose from.”